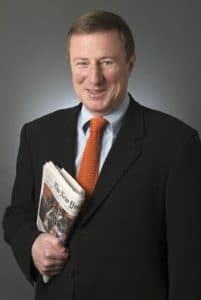 By The Kilduff File

Surviving the demands of the 24/7-news cycle requires stamina few possess. PR kingpin Sam Singer is one of the few who can handle the rigors. A former newsman, Singer has managed to parlay his flack-catching of current-event coverage into a mini-empire. More recent high-profile clients include the city of San Bruno in the fight against PG&E in the aftermath of that city’s gas pipeline explosion and the San Francisco Zoo and its killer tiger. The Oakland resident’s current high-profile case has him taking on the Golden State Warriors in their effort to move across the bay to new digs near UCSF’s growing Mission Bay campus. Singer and his client, the Mission Bay Alliance, claim, among other things, that the ensuing throngs of “Warrior worriers” to the new arena would have a detrimental effect on those trying to get to UCSF Medical Center in an emergency.

Paul Kilduff: San Francisco’s planning commission has signed off on the arena as presumably will supervisors. What’s next?

Sam Singer: Most likely we will be weighing our legal options and taking the Warriors and the city of San Francisco to court to protest the illegal manner in which the arena has gone through the approval process in San Francisco. From our perspective, the Warriors’ arena was a rubber-stamp job by regulatory authorities in San Francisco, and it threatens people’s access to UCSF. If it is built, it will create a traffic jam that will stretch across the bridge back to Berkeley and Oakland, all the way to highways 101 and 280. There are only 200 dedicated parking places for an 18,500-seat arena. You just can’t make the math work on a plan like that.

SS: At the moment, even the Giants games are causing significant traffic and parking issues in San Francisco. BART is at capacity. Muni is close to capacity in San Francisco, and there just aren’t enough train cars or buses for public transportation of any kind to get people to, not just the Giants stadium but to a brand new 18,500- seat arena. It will result in carmageddon in San Francisco.

PK: Carmageddon? Did you make that up?

SS: No. It was a phrase used when they shut some freeways down in L.A.

PK: Is your group’s goal to just scale down the Warrior’s plan or kill it?

SS: We would love to see the Warriors come to San Francisco. We just believe that the Mission Bay location is not appropriate. It’s 1,000 feet from the emergency room door of UCSF hospital, and it’s in a neighborhood that was created for bioscience and research, not for a gigantic stadium with literally no parking. We actually proposed a location between 101 and 280 in the Bay View district. There’s public transportation as well as excellent freeway access, and we hoped they would take that seriously.

PK: One of the side benefits of this not working out is that the Warriors actually stay in Oakland, but it sounds like that’s not something you’re concerned about.

SS: I think there are a lot of people who raise the question of since Oakland has been home to the Warriors for over 40 years, if this is how the Warriors treat Oakland, imagine how they’re going to treat San Francisco.

PK: Not ever calling themselves the “Oakland” Warriors sticks in my craw. It comes across as “we’re ashamed of playing in Oakland.”

SS: I’m sure a lot of people feel that’s one of the things that plays into the current Warriors ownership plans. That somehow Oakland is a lesser city and that’s why they’re moving to San Francisco. It’s not fair. Oakland’s great. Oakland’s been very supportive of the Warriors for four decades. What’s the first thing that happens when they win? They announce they’re getting out of town.

PK: Will you remain a season ticket holder no matter what happens?

SS: Yes. My wife loves the Warriors almost as much as she loves me, perhaps more on certain days.

PK: Oakland has been so dependent upon professional sports teams creating its identity, starting with the Raiders. What’s up with the mayors, including Jerry Brown—no big sports fan—being so antagonistic. I’m not saying they need to lie down and give teams whatever they want, but they’ve gone in the other direction. The Raiders look like they have two feet out the door.

SS: I think with the announcement that Bob Iger, the head of Disney, is becoming the chairman of the Carson, Calif., stadium plan—that is probably the death knell of the Raiders remaining in Oakland. The power, the pizzazz, of having Iger take this on as a project is going to be a gigantic lure for the Raiders, and I think it’s going to be very hard for them to say no to that, unless someone can make a competing offer here in Oakland.

PK: One idea floated recently is that Oakland provide some stadium funding in exchange for a piece of the team.

SS: I’m not sure Mark Davis wants to give up anything to anybody, but that’s going to be a problem for him. If he wants to move anywhere outside Oakland he doesn’t have the money to build a stadium unless he gives up some level of ownership.

PK: Or does something about that haircut.

SS: Oh, my, god. There is a man in desperate need of a makeover. Maybe the only other guy who needs a makeover as bad is Donald Trump. My hair-cutting services are available.

PK: The ‘I’m-not-bald-check out-the-bowl-cut’ look is not going to go over too well in Los Angeles.

SS: He’s going to have to go to a special-effects department.

PK: You also represent the Napa Valley Wine Train in its dispute with the women’s book club that was kicked off the train for having too much fun. Now they’ve filed an $11 million lawsuit. What’s the strategy?

SS: Now that it’s a legal matter, you have to let it wend its way through that process. I think that what was important was, when the incident occurred, the women demanded an apology. They got an apology from the ownership and management of the train, a profuse and very personal apology. Somehow then that wasn’t good enough for them, and instead they wanted money to salve their alleged pain. I think the public, when they look at this from start to finish, will have a different idea of what occurred.

About the Author: Rachel Sherbow